A thought that sets you free

Città Nuova (the Italian New City) interviewed Maurizio Gentilini about his new biography on Chiara Lubich. It has just been published in English: ‘Chiara Lubich – Prophet of Unity’

To have a clear and critical look at the founder of the Focolare Movement, perhaps we need someone who, though knowing her, had not grown up within the Focolare Movement. This is the case with Maurizio Gentilini, author of the biography Chiara Lubich – Prophet of Unity. Born in Rovereto and working at the National Research Council at the Department of Human Sciences, Gentilini approached the writing of the book from a historical perspective. He presented it on the occasion of the centenary of Lubich’s birth. 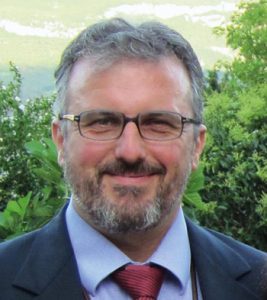 You claim to have got to know Chiara as someone ‘who was only baptised’.

That was said in jest! I grew up in a parish but with a faith made up of many doubts and uncertainties. I do not belong to the Focolare Movement, but I was able to ‘breathe’ its spirituality and universal yearning for unity, which can be felt everywhere in Trent. I wrote this biography at the request of some representatives of the Chiara Lubich Centre. I accepted the challenge, trying to become acquainted with the sources about her as an individual person as well as what she did. As a scholar and believer, I tried to apply the historical-critical method, looking for a way to interpret everything as an interplay between history and prophecy.

What prompted you to accept this request?

We are talking here about a witness and a protagonist of the 20th century who is difficult to place within the schemes we usually use to classify public figures. An impressive feature of her thought and work is the fact that she managed to embrace both sides of a changing era, offering us ways of understanding both the present and the future. Her charism was capable of penetrating cultural and religious dimensions which were different from her own, of relating to spiritual and political leaders on equal terms, of authoritatively presenting her convictions in international assemblies and of cultivating relationships within all sorts of environments. Those who listened to her perceived how her vision was based on the coherence between the reality of God and the reality of history: ‘as in heaven so on earth’. One could say that her perspectives went beyond history.

Coming from Trent yourself, is there anything that struck you in particular?

The place she came from and where she grew up surely contributed to making her a citizen of the world. The province of Trent is a border country. It was part of the Austro-Hungarian Empire. It only became part of the ‘kingdom of Italy’ shortly before the birth of Chiara Lubich. Here, a socialist kind of Catholicism had, since the late 19th century, been helping entire generations escape from poverty, promoting the idea of the common good and giving the people prominence and dignity as laity that gave us leaders and statesmen like Alcide De Gasperi. Chiara’s father was a typographer with socialist ideas, a friend of Cesare Battisti. Her mother Luigia was a woman of deep Catholic faith, while her brother Gino was a communist and partisan. The family already had plenty of opportunities for confrontation. In Trent her charism developed and it is in the Dolomites that she lived her mystical experience that marked the rest of her life.

You marked two periods as being of peculiar vitality for the Movement, the summer of ‘49 and the period after Chiara’s death. You also refer to the ability of the Movement to re-invent itself constantly. Would you say that it is always in the ‘present’ that we find the moments of greatest vitality?

The spirituality of unity finds its home in the most unthinkable places throughout the world. It meets the needs of men and women of every era by looking for dialogue and communion.

After centuries of abstract theological reflection, Chiara seems to have given an ‘empirical’ interpretation of the Trinity that can be lived and experienced. She affirms that we are made for relationships and encounter – for that God, who is Father, Son and Holy Spirit. He, by creating us in his own image, impresses on us this desire for communion. We need this relationship of love to become new people and part of humanity.

And yet we see the rebirth of populism, which also existed at the time the Movement was born. What would Chiara Lubich have to say today?

Her message leads us to recognize the common good as the guiding principle for political action. It brings us to the rejection of reasoning along party-lines, which make it impossible to identify common goals and lead to sterile protest. Her message is an antidote against the populism that is raging today. It is a way of thinking that sets us internally free, which is necessary in order to be able to commit ourselves beyond the borders of self-interest and makes us capable of remaining faithful to our choices in the face of every obstacle. Her message also aims at developing our convictions in the political world and all other fields of society. This helps us to discern and make decisions, while respecting the secular nature of time and space and the roles we have to play. Her message is also addressed to the Church: to educate its people and make them aware of its social doctrine and of the difference between ‘what belongs to Caesar and what belongs to God’. The Church needs to help people become capable of coming up with and evaluating political proposals and initiatives that meet the needs of the community. It needs to make them capable of being totally fulfilled people with their own dignity while not avoiding being a critical voice when faced with choices that prevent peace or endanger social cohesion.

You have been travelling all around Italy to present your book. What kind of reaction have you received?

I find that people are extremely interested. I have the idea that Chiara Lubich is better known and esteemed than one might think, even in places and contexts apparently far from her own way of thinking.

If You Enjoyed This Post
Join Our Newsletter
By clicking Subscribe, I consent to you using my details to send me the New City UK newsletter and confirm I have read and understood New City Publishing House/Mariapolis Ltd’s Privacy Policy.
By NC editor|2022-07-28T13:42:45+00:00August 20th, 2020|NC Articles, NC Book Review|0 Comments

This site uses Akismet to reduce spam. Learn how your comment data is processed.

Arts Christmas Culture Dialogue Ecology Economy ecumenism Education Family Focolare Health Meditation Poetry Politics Profile Reflection Review Society Spirituality of unity Story Thoughts from the kitchen Word in action Youth
If You Enjoyed This Post
Join Our Newsletter
By clicking Subscribe, I consent to you using my details to send me the New City UK newsletter and confirm I have read and understood New City Publishing House/Mariapolis Ltd’s Privacy Policy.
View Cart Checkout Continue Shopping
This website uses “technical cookies”, including third parties cookies, which are necessary to optimize your browsing experience. More information on what cookies and how we use them can be found on our Privacy and Cookie Policy page Settings Accept